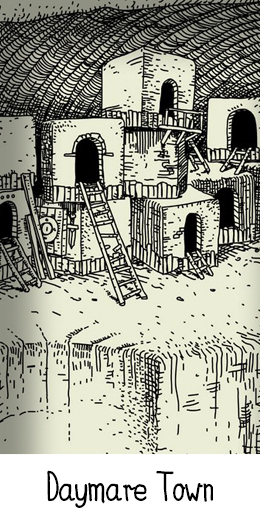 My soul is among lions: and I lie even among them that are set on fire, even the sons of men, whose teeth are spears and arrows, and their tongue a sharp sword.

Never judge a book by its cover:
judge the cover by its book.

A short description of teleportation, a story 100 words long (called a “drabble”):

The Light of Passage

Shadows before, shadows behind, but none below or above. Was there light? No. Light is not the lack of shadows.

The shadows were silhouettes of men, cloaked and bareheaded in the darkness. A light sprang up in the lack of shadows above me, and lighted nothing but itself and myself.

The next morning, as we started, we spied, a little way from us, two skeletons moving about in a thicket. The Little Ones broke their ranks and ran to them. … The children at once made friends with them, laying hold of their arms, and stroking the bones of their long fingers; and it was plain the poor creatures took their attentions kindly. …

Perceiving that they had gathered handfuls of herbs, and were looking for more – presumably to rub their bones with, for in what other way could nourishment reach their system so rudimentary? – the Little Ones, having keenly examined those they held, gathered of the same sorts, and filled the hands the skeletons held out to receive them.

– From Lilith, by George MacDonald

With one minor exception, the entire population of the world consists of other people.

– Paraphrase from a talk by John Maxwell

It was one of those delightfully irregular houses where you go up and down steps out of one room into another, and where you come upon more rooms when you think you have seen all there are, and where there is a bountiful provision of little halls and passages, and where you find still older cottage-rooms in unexpected places with lattice windows and green growth pressing through them. Mine, which we entered first, was of this kind, with an up-and-down roof that had more corners in it than I ever counted afterwards and a chimney (there was a wood fire on the hearth) paved all around with pure white tiles, in every one of which a bright miniature of the fire was blazing.

– From Bleak House, by Charles Dickens

This description intrigues me particularly. It also reminds me of C. S. Lewis’s description of Professor Kirk’s old house.

P. S. Here is another pattern I made some years ago.