A collection of seven dailies from the Facebook Page!

My brother Nathaniel tries his hand at pointillism. 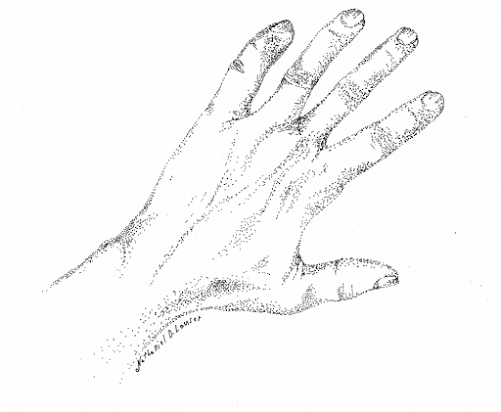 Trying something: an Arena.
I introduce two characters, and you choose which of them will win a sporting contest of power.
The setting is the universe of the Portal, on the Front, more description of which will be revealed in the Arena and hopefully elsewhere as well. Next week the votes will be tallied and the battle described.

A wide hand and wide brow, grim mouth and unexpected force of power. Few have met any of his family, but have heard much of his honor in their name of “Fearus”. His hair and clothes are dark and rather ragged when studying or fighting and not socializing.
He is shown in the image summoning a defense of tortoise shell.
– Imagined and depicted by Patrick Lauser

A thing of night shadow, though friendly and humorous. His physical body consists of a smoke-like darkness, and he has a casual command of obscure powers. He is a first generation visitant of the Front. His preferred summoning is a claw gauntlet and helmet of hard and silent aerial crustacean shell into which he flows like the tide into a coastal cave.
He is shown shattering a sorcerer’s blade on his gauntlet.
– Imagined and depicted by Nathaniel Lauser

(Here is a link to their fight.)

“A mob’s a monster; heads enough,
but no brains.”

Who noticed what the image is of?

I fell down a well: I cannot get out.

It is better than what I escaped from.

I hear voices from below, “Who are you? How did you get up there?”

I look down from the bottom of the well into a city. It is the wrong city: the way out was from the city I was born in, which was cut off from every other city.

I could go down. It might not be like the nightmare where I was born. So I could get out of the well, but I cannot get out… out.

I want to stay.

A more solemn and mental story, I hope I have captured the full sense of such a scenario.

The arrow was well directed, and struck his eye in the center of the pupil, but did not pierce it. It slipped, caught under his eyelid, jerking his head backwards, and the arrow continued on its flight, and he continued pressing forward. He had not blinked.

– Patrick Lauser
(A random description without context found among story ideas from four years ago.)

(This note is quite without context: next comes:

“The concept that wounds let part of a person’s spirit (or a kind of spirit that is in everyone, or in a certain group of people) out of their body into the spirit world, and that the corpse must be sealed and preserved (mummified) in a very specific way in order to keep as much of it, or a vital part of it, within the body.”

and before it is:

Some Elder Futhark decor from my brother Nathaniel’s birthday!

He made the cuirass himself by the way: cut it out of an old Land Rover roof.

Some 3D cave decor from my brother Josiah’s birthday!

He invented an amazing culture which we used as a theme.

A blessed Christmas time to you!